Kashmir will always remind me of Kashmiri Pulao and a vacation we missed taking. The Kashmiri Pulao was the best that Amma always used to make during our growing up. After I got married, it was never prepared, atleast in my kitchen, because Hubby dear can't stand anything sweet in his savoury dish. And the Kashmiri Pulao, with all its fruits and nuts, was absolute no no for him.

So as you can imagine it was never made at home. While deciding on what to do for Jammu and Kashmir, I was tempted to think of this pulao, and wanted to just concentrate on the Breads. Again this seem to be a tough nut to crack and hugely depended on just handful of sites to get details. As I was reading so much about Kashmir, I remembering about our missed tour some 25 years back and the only dish I ever related to this state being, the Kashmiri Pulao. I am not even sure if it was authentically made here.

Kashmiri cuisine is mostly meat based, though as with most other Indian States, you will find vegetarian food too. Their cuisine includes locally grown vegetables and fruit like spinach or greens (haak), turnips, lotus stem (nadir), brinjal, plums, apricots, green apples, etc.
Kashmiri cuisine seem to have been greatly influenced by Persian, Afghani and Central Asian. And their rich cuisine seem to have stemmed from this. You will also find the Hindu Kashmiri Pandit style of cooking different from the Muslim style of cooking. The famed Kashmiri Wazwan is supposed to be a gourmet experience.

The Wazwan is a multi-course ritualistic meal, mostly meat based, cooked by specially trained “wazas (cooks/ chefs) for festive and celebratory occasions. Kashmiri Muslim cooking is essentially non vegetarian whereas Hindu cooking includes quite a bit of vegetarian food.

Kashmiri cooking uses a wide range of Indian spices including cinnamon, saffron, cloves and cardamom. And you will find both rice and wheat being given equal importance in the Kashmiri cuisine.

So while reading on the breads available for me to cook, I came to know about Roth (a sort of dry fruit bread/ cake) and flatbreads like the Kashmiri roti, Khameeri Roti (a sweet yeasted flatbread), Tsot (a breakfast bread), Kulchas, Girda (a Naan-like bread), Lavasa (raisin and nut bread), Sheermal (a saffron flavoured Naan-like bread). - from Aparna. Check her post for more elaborate details on Kashmiri Cuisine.
From the lot I zeroed to Kashmiri Roti and next was the task of deciding which side dish would pair well with this roti. I had a talk with Vaishali and only then I was reminded of her elaborate Kashmiri Thali she had done for my Thali Mela.

Landing on her post to check, clearly told me that it was an exercise that I can never venture completely. So decided on making two different subzis. I know we did a Kashmiri Dum Aloo for Indian Cooking Challenge. However after reading through Vaishali's elaborate Kashmiri Dum Aloo, I realized it was a different version and one that I should surely make.

The other dish that Vaishali told me that was quite popular is Methi Chaman. Chaman is what Kashmiris call Paneer. And you can know Paneer can never go wrong! I had couple of Kashmir Paneer noted down somewhere, however I was keen on making with Methi.

So it was decided, it was going to be Kashmiri Roti with Kashmiri Dum Aloo and Methi Chaman. All the three dishes were so much enjoyed by my entire family. Infact I had my cousin and aunt visiting us and they loved the food, though it took sometime to make all these on a weekday!

Whatever the final enjoyment that comes from a satisfying meal is what matters I feel. I wanted to make some traditional dessert along with this, I skipped as I wasn't sure if I would manage. 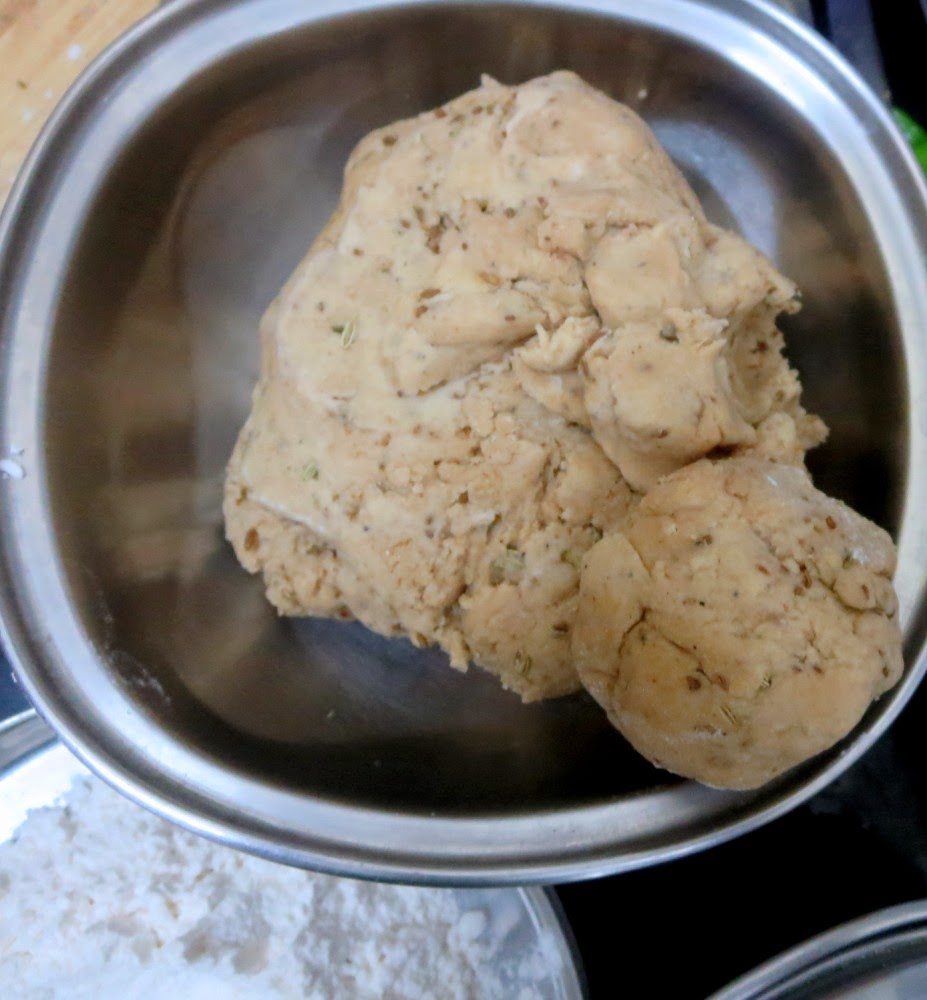 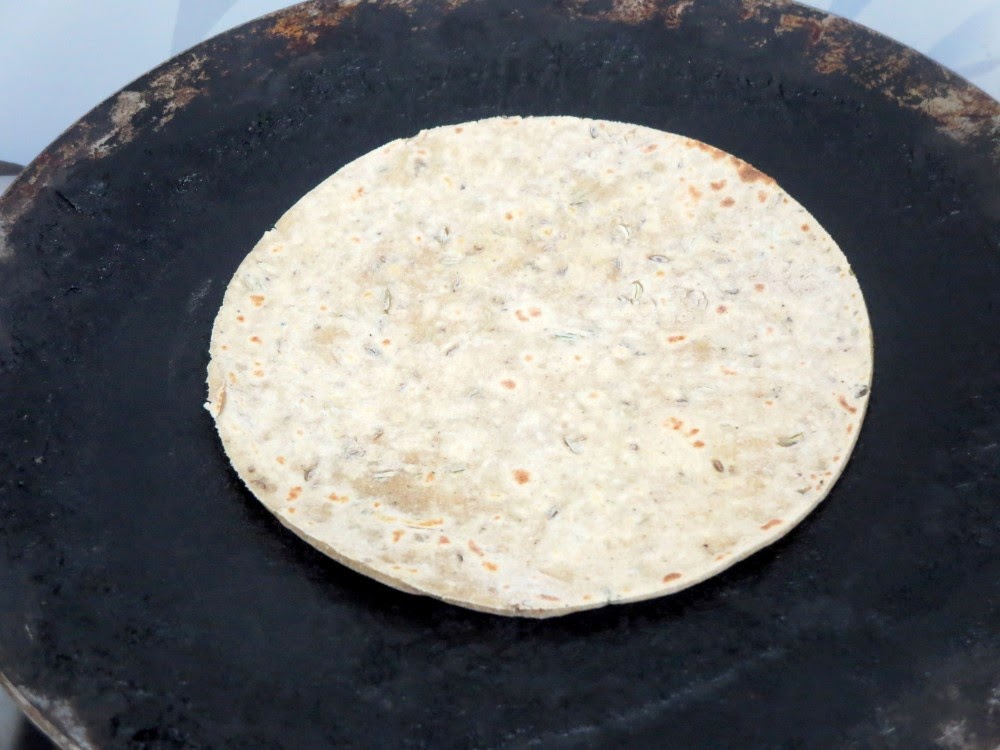 I had referred to Tarla Dalal's recipe for this and Vaishali said this comes out very well. So I didn't think more on this. Like all other Kashmiri preparations, this roti has a delicate blend of spices. The dough is kneaded with milk to bind the dough instead of water as this helps to enrich the roti. You may even add saffron if you desire.

How to make the Kashmiri Roti

Mix all the ingredients together and knead into a semi soft dough.

Keep covered with a wet muslin cloth for 10 to 15 minutes.

Divide the dough into 3 equal portions and roll out each portion into 1/4" thickness rounds.

Cook on a hot tawa over a low flame, using ghee, till both the sides are golden brown in colour. 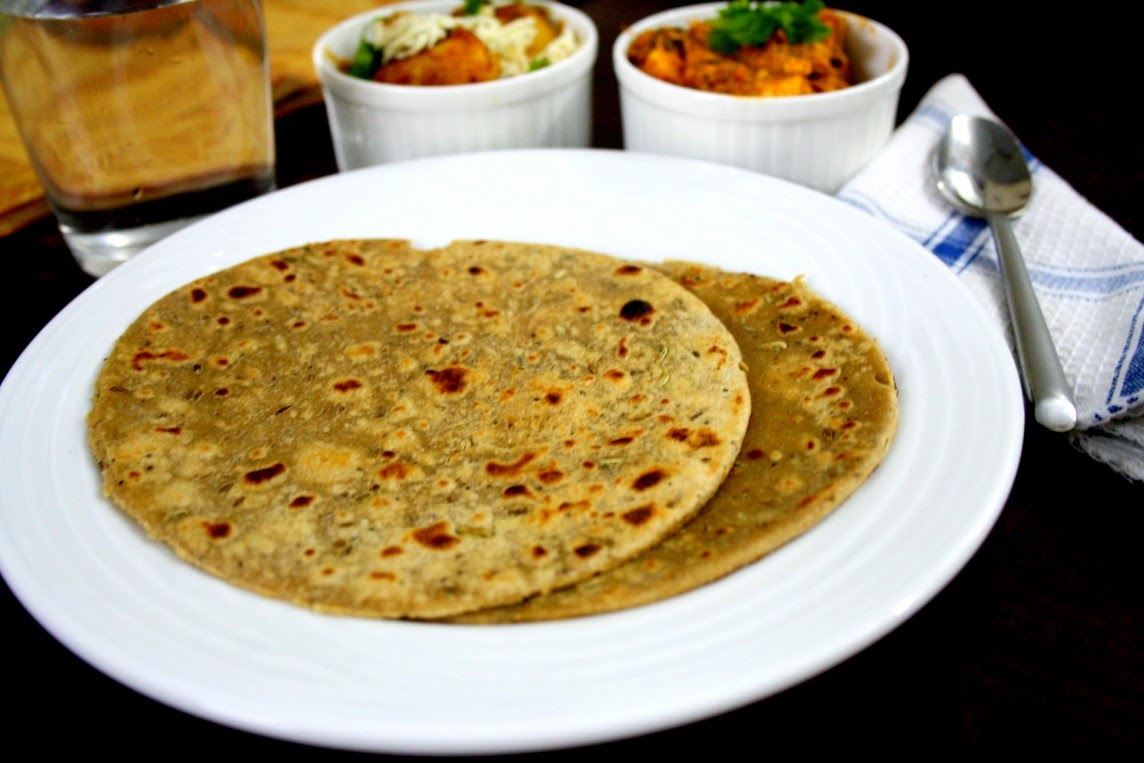 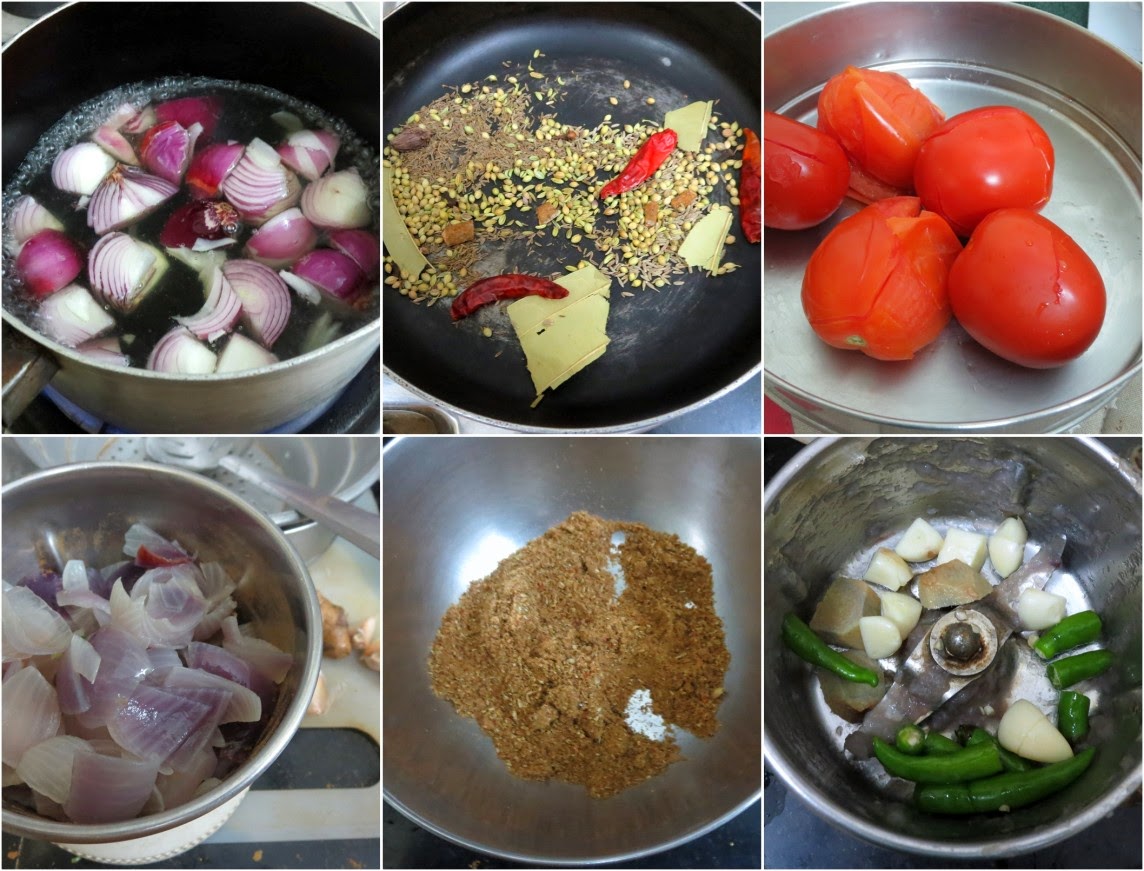 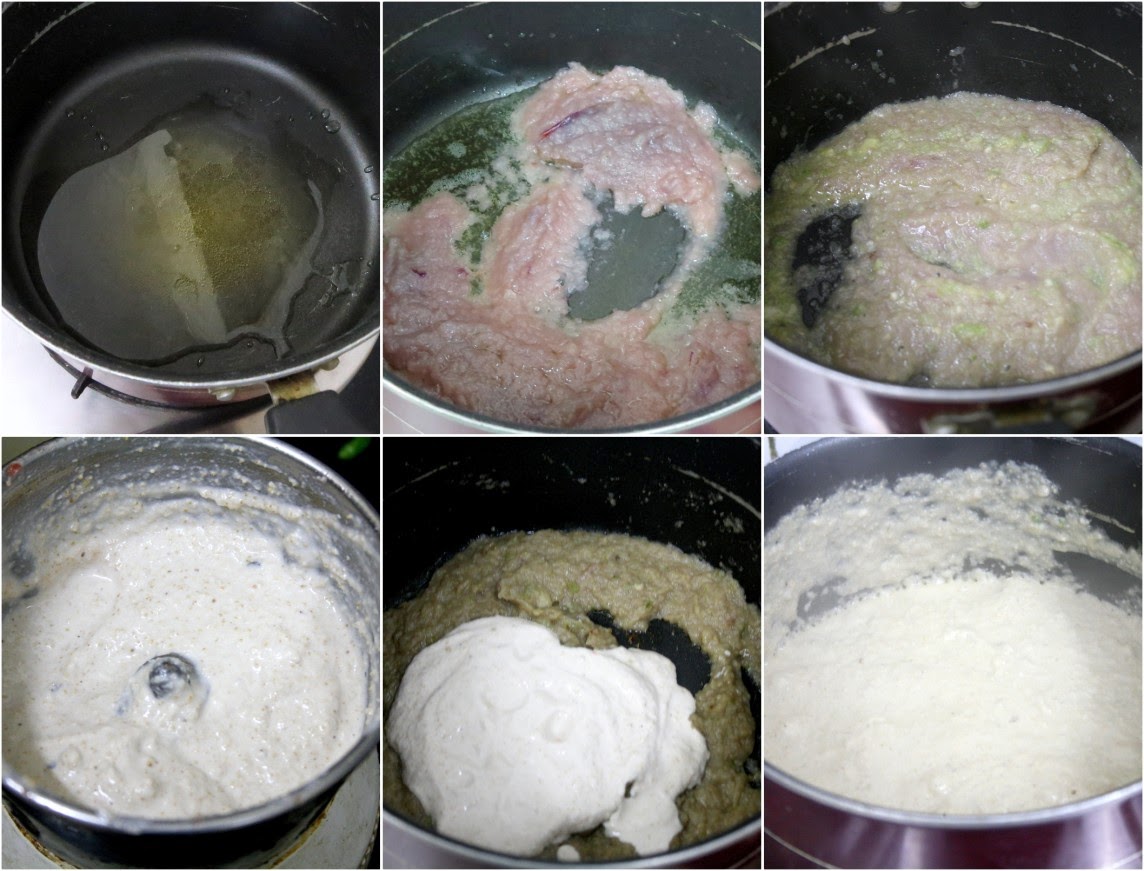 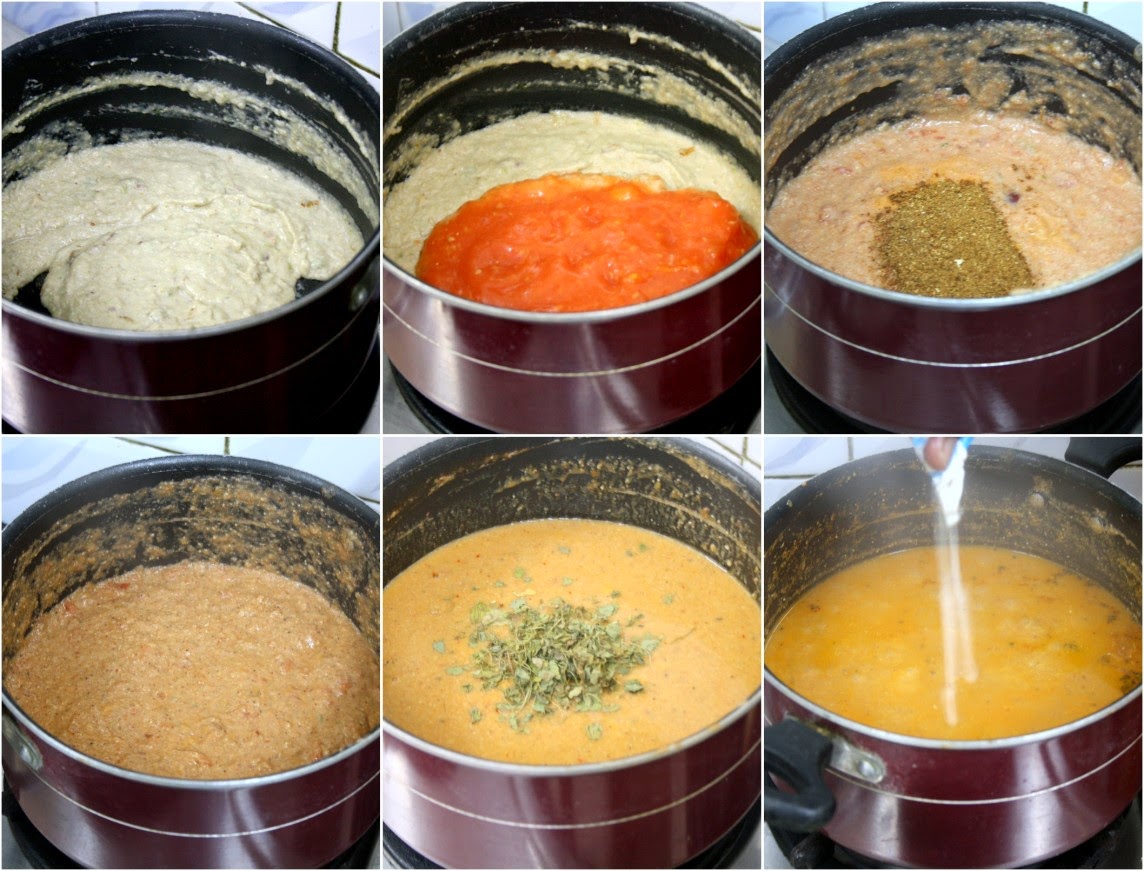 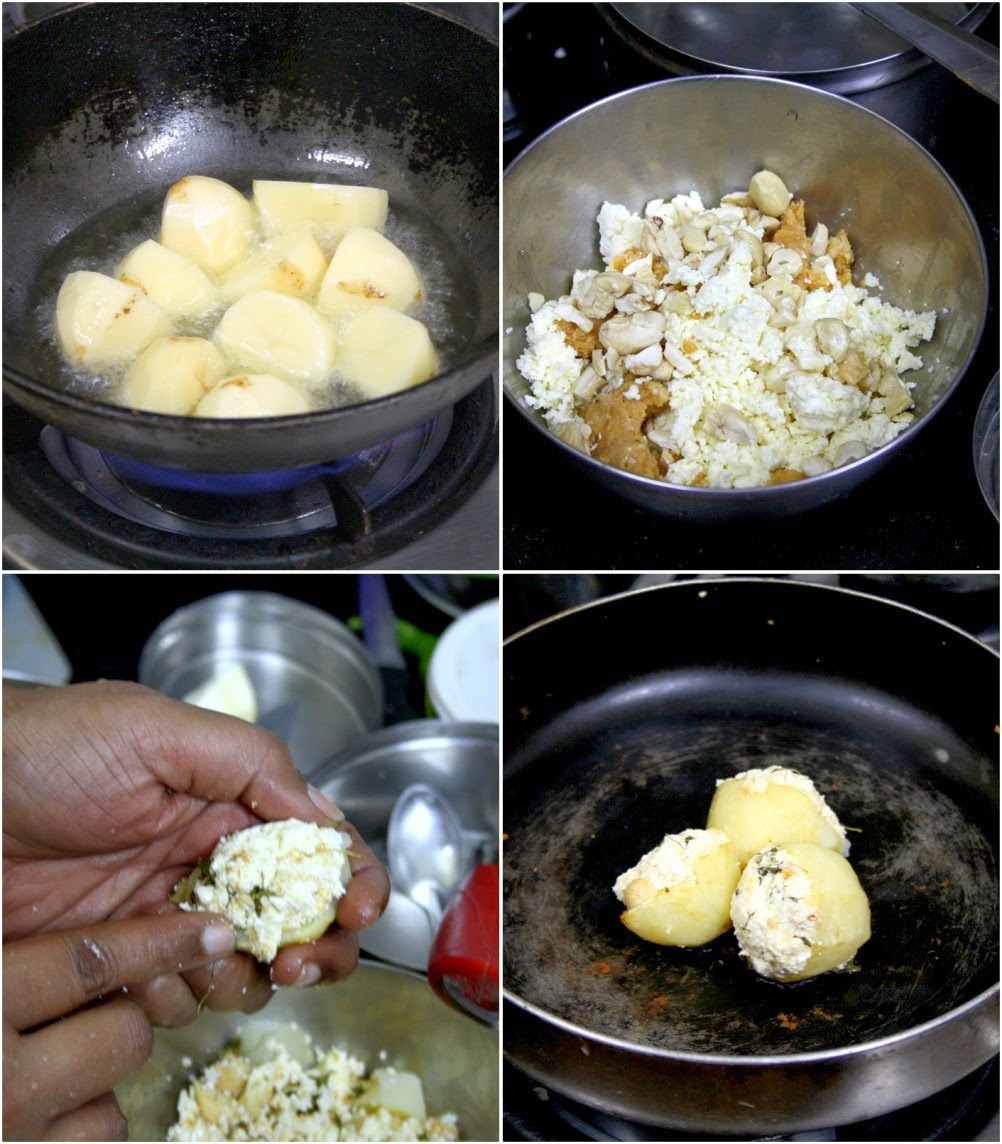 Cashews, soaked 8-10
Melon seeds - 1 tbs
Poppy seeds 1tsp
MW a cup of water for a min and soak all these for 10 mins and make a paste.

Spices to be dry roasted and ground

How to make the Aloo Dum Gravy

Heat a non stick pan with oil and ghee.

Add paste 2 and give a good stir.

Add the paste 3 and cook till dry.

Add the pureed tomatoes, cook till dry and oil comes out.

Add the ground spices. Mix well. Bring to boil. Add  water to get the desired consistency.

Cook on slow fire till a little thick.

Add fresh cream and kasoori methi and switch off gas.

Place the stuffed potatoes in the serving bowl, microwave for a few minutes.

Sprinkle salt on the potatoes.

Deep fry, adjusting the flame from high to medium, so that the potatoes get cooked and yet retain their original color.

Cool and scoop out the center.

Make a tight ball of the stuffing and stuff this into the scooped out aloos.
Notes:


As always the measurement that I followed was all eye balled. I have given the reference with what it could be.

I made double the amount mentioned here, so increase as twice you want to do. It served about eight folks.

Since I was serving this dish for my boys, I added 2 cups of roasted paneer pieces.

Also as this was weekday cooking, all I had was just an hour to prep and cook. So in that lost track that I should fry the whole potatoes properly in the beginning. so at the end when I was frying it as whole, it was taking lot of time. In the end it wasn't fully cooked.

So had to MW again for 4 mins all the aloo stuffed paneer and add it back to the gravy.

What will work in a regular time as well would be, fry the whole potato for few mins, so that the top gets crunchy, then MW for 4 mins. This will get the aloo to become soft, you can easily scoop the middle and stuff the paneer and roast again.

This way the aloo paneer stuffed becomes even more delicious. 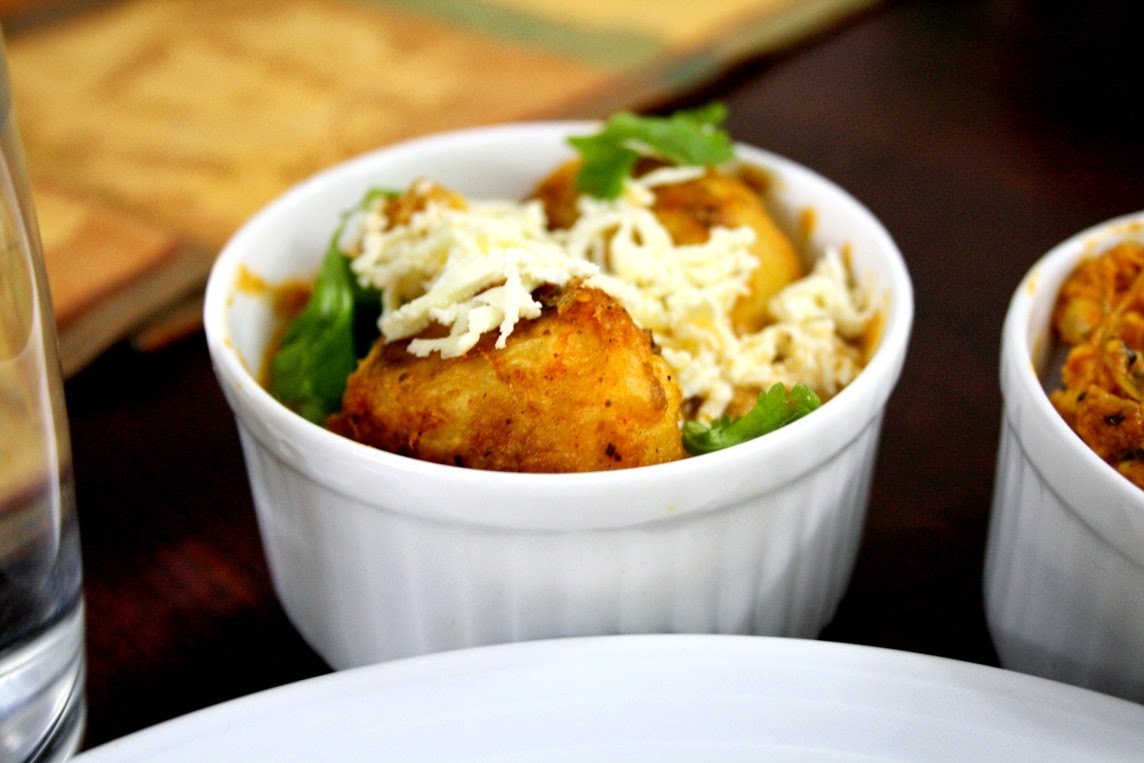 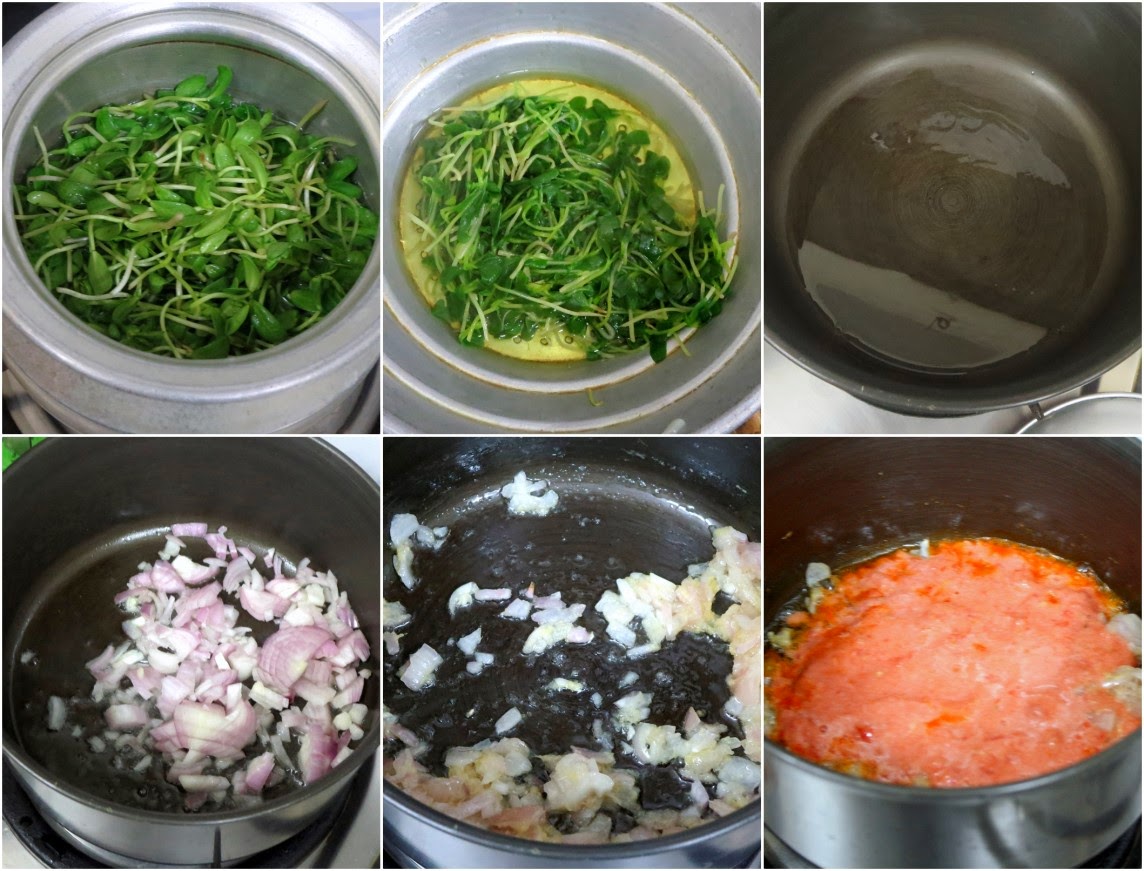 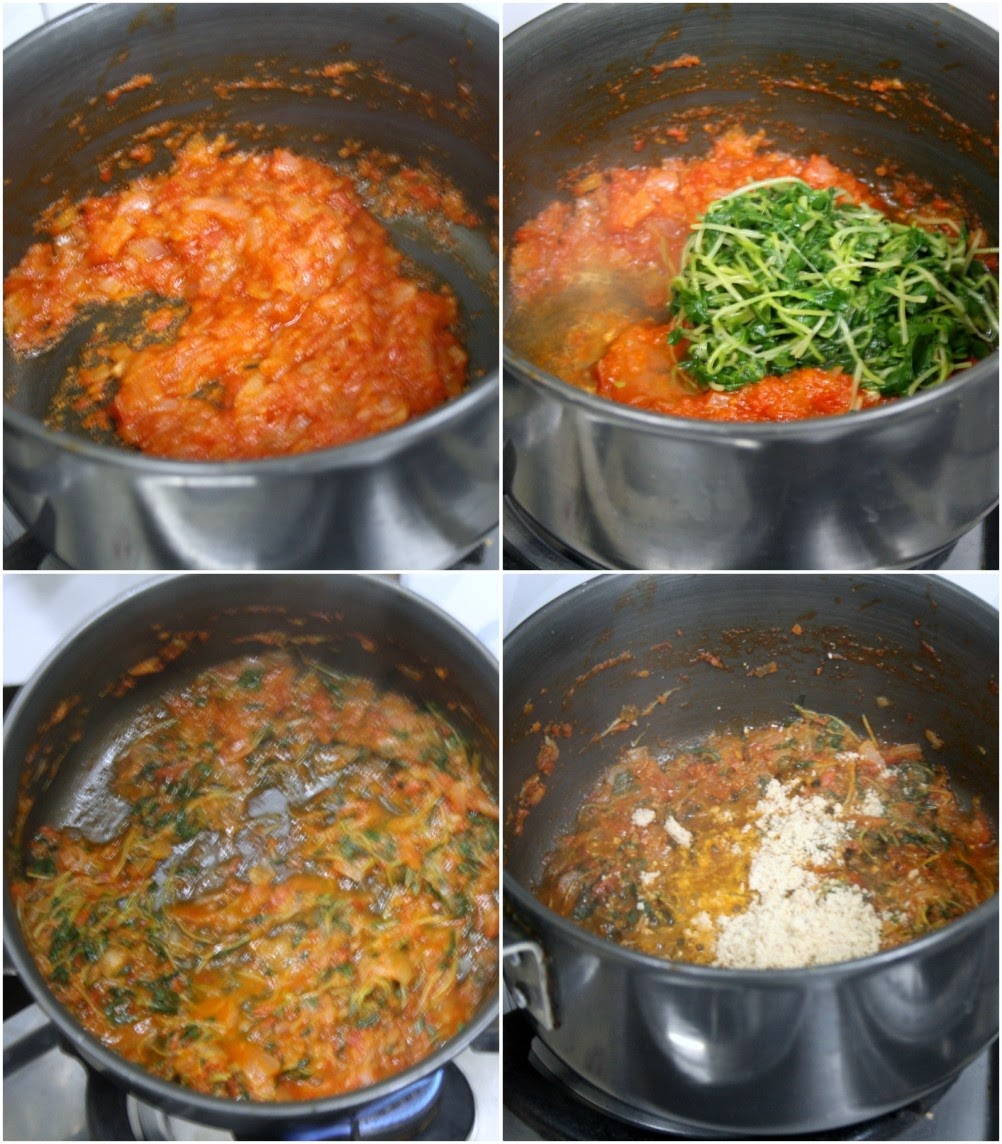 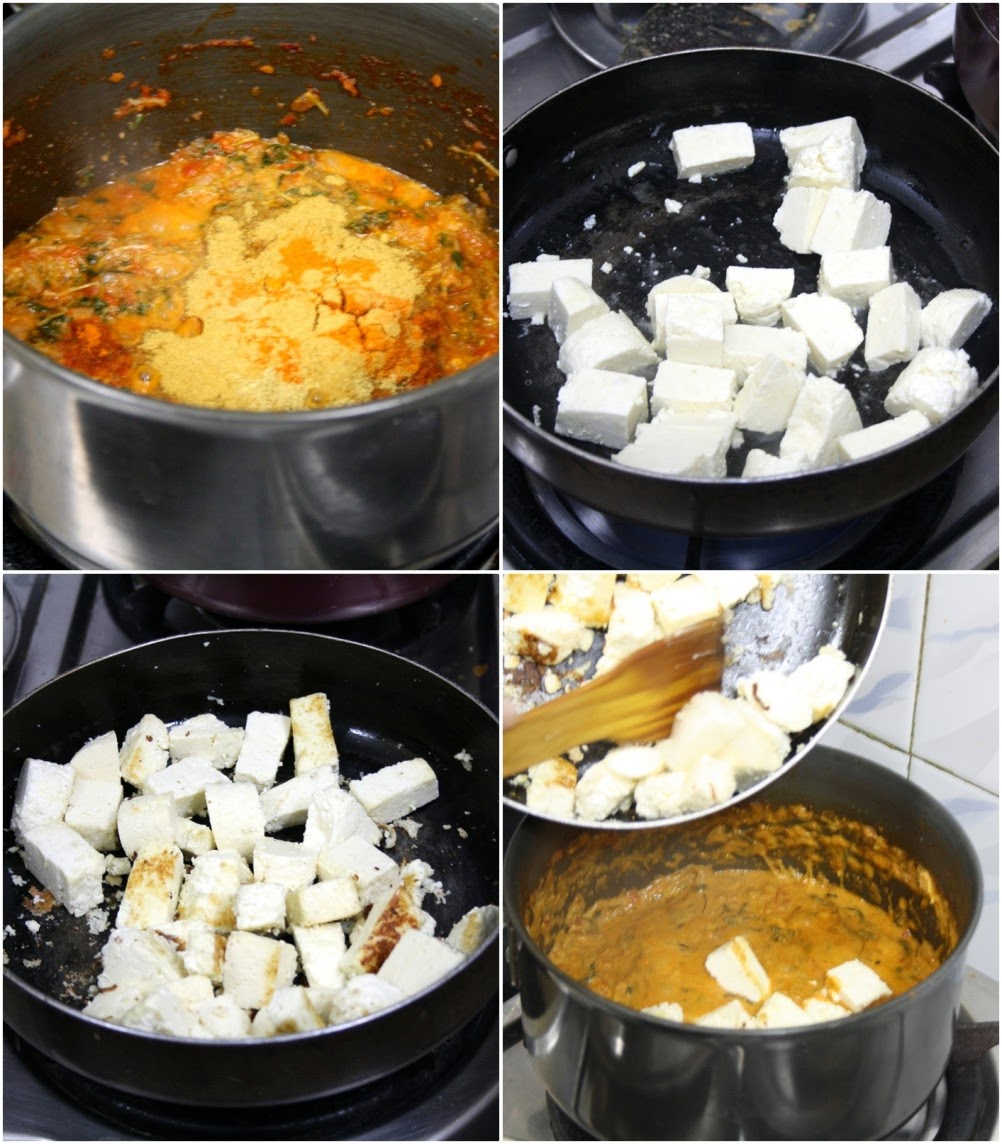 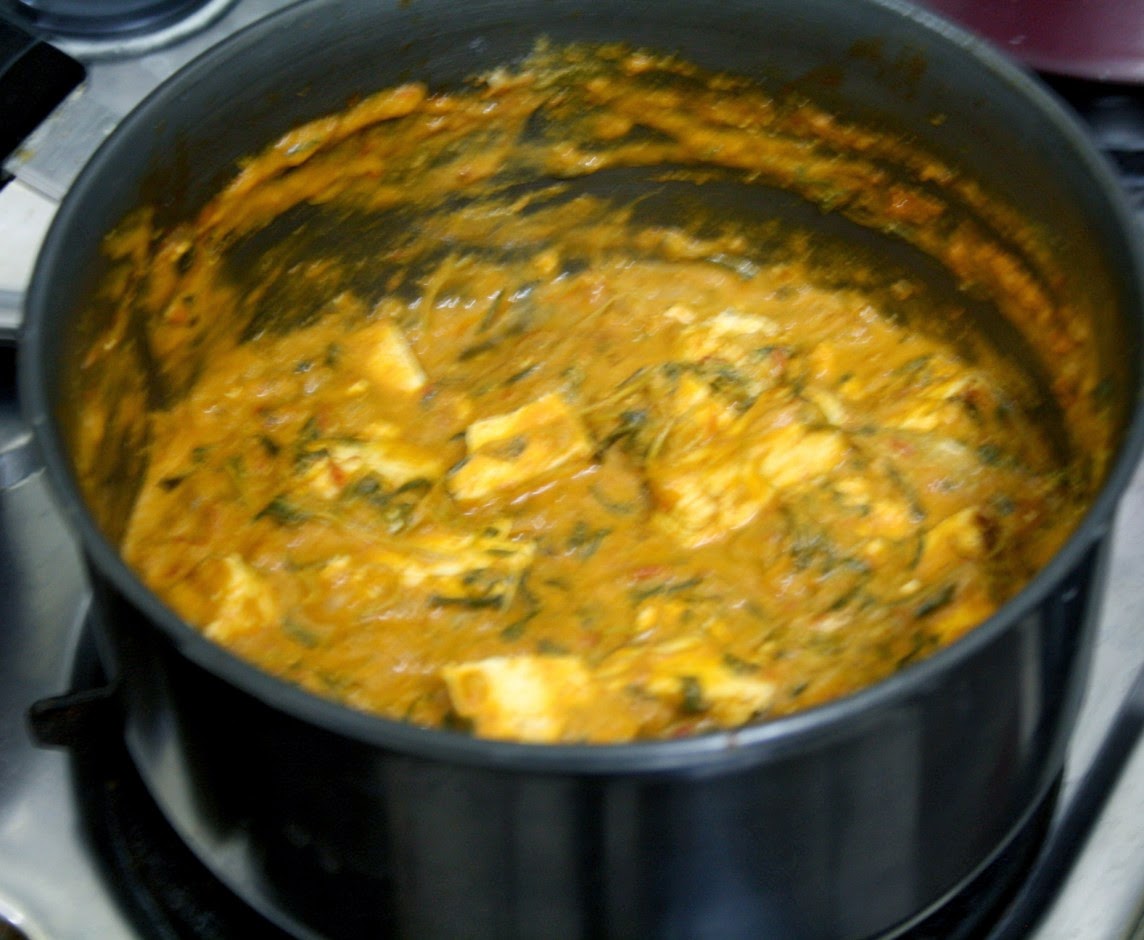 How to make Methi Chaman

Prep and clean the methi and drain well. In a cup of boiling water, add the methi and simmer for 10 mins. Switch off and retain the water as well. Chop into smaller leaves and keep it aside.

Then add tomato puree, bring to boil and cook till the raw smell of tomato is gone.

After couple of mins, add the saved water from the blanched methi.

Cook everything in sim and keep stirring.

In another pan, roast the paneer and finally when the gravy is thick as desired, add fresh cream and paneer and cook for 5 -7 minutes for the flavour to be absorbed. 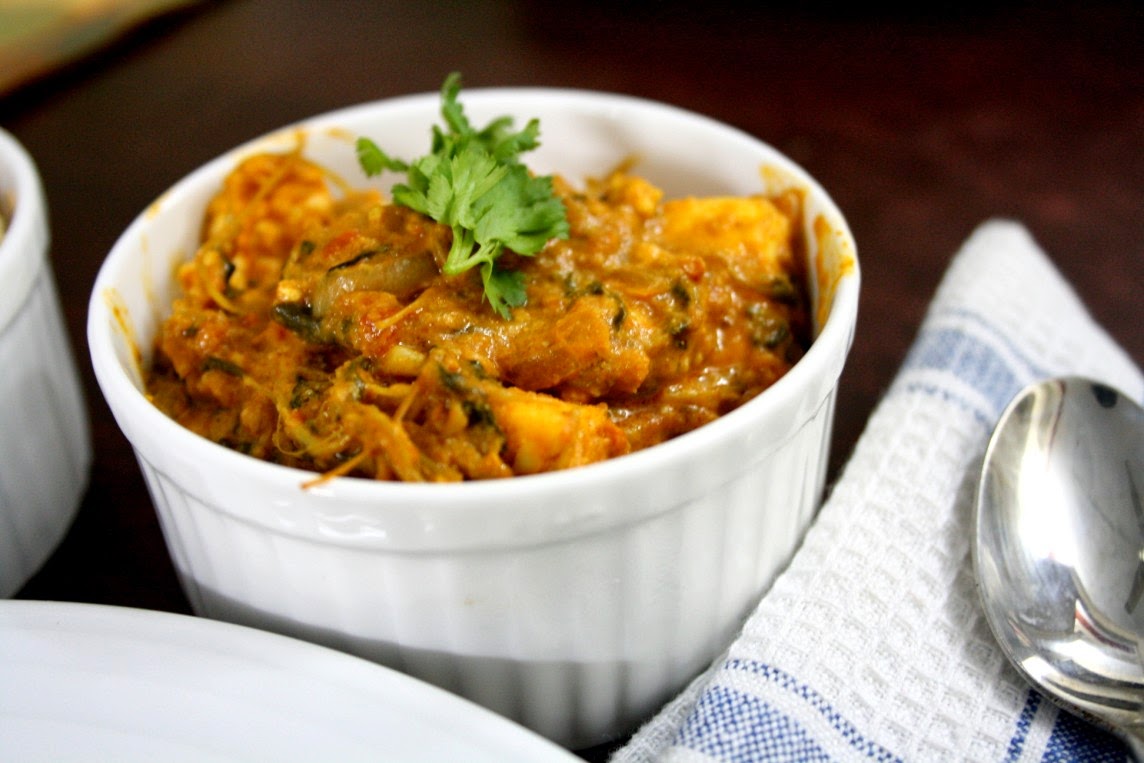 Original recipe didn't call for fresh cream.
Fennel powder was to be coarsely ground, I added fine powder.
Since I blanched methi, I had excess water which I didn't want to throw away so added to the gravy.
Not sure if this subji has to be dry, I rather made it thick

This was the fourth state that I cooked couple of months back and since it was the initial period, I had more time to enjoy and place elaborate meals for a weekday dinner. This was also one of the dishes that everybody whoever ate, enjoyed most.

I will surely have to plan to make this again.