One can never think life can offer so many twists! It was a moment of realisation that I was in a now or never situation and I had to make the best of it. Trust me I would never have thought I would one day share this simplest of bajjis for a mega marathon. I had a very complicated tea time dish and that too from a different cuisine.

I have too many things on hand and was not in a position to cook that dish ahead. Till the last moment I was hoping, I will be able to make it. That is no excuse I know, just that I didn't want to miss out and couldn't tax myself further.

As I had said in the Onion Bajji post, these bajjis are no rocket science and I would never have dreamt I would make these. I had referred about the Hotel where we used to stop during tea time and used to enjoy the crispy potato bajji. It used to be so delicious. You can read about it in the other post on the crispy Onion and Potato Bajji. 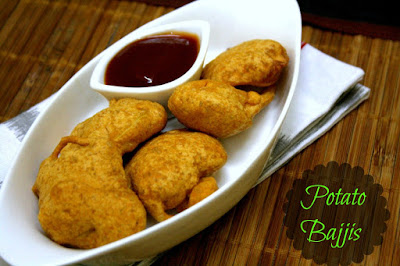 Today's Urulaikizhangu Bajji is more what Amma makes at home. With Cooking Soda, the batter is very fluffy and thick. She adds vamu or Ajwain to aid the digestion. So we can never think of a bajji without ajwain in it.

The best part was, of course, Konda and Peddu enjoying it. Chinnu refused to be part of it. I guess he will take some time to get used to the Indian versions of these Bajjis, while he enjoyed the Scottish Tattie Fritters. Yes, you got it right, this is almost the same. 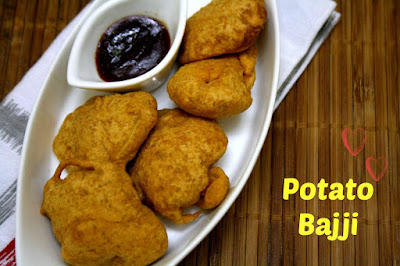 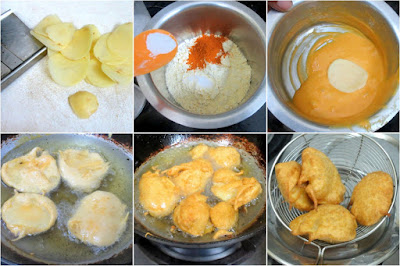 How to make the Bajjis

Wash and peel the skin of the potatoes. Using the slicer, slice into thin circles.

Make a thick batter with the ingredients listed and whisk till it turns frothy.

Heat the oil and when hot, dip the potatoes into the batter and drop into the oil.

Cook on both sides and drain on a kitchen towel. 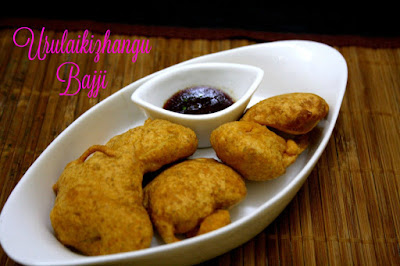