Next, in the list of Flatbreads, I landed in Romania where I selected to make Placinta. I was inspired when Priya Srinivasa had done this for her Flatbread series and decided I will take the easy route by checking out her space. I have the whole series bookmarked anyways!. I had read about this from other sources as well. Though I thought I will stick to the inhouse Ph.D. and refer her research work, than spending my own time.

I read that Romanian cuisine is influenced by Ottoman cuisine and from other neighbouring countries as well. So you will find a lot of similar dishes across countries. Believe me when I say that I landed in certain dishes which were just the same, except for the name being different. I was forced to pick up something else at the last moment. 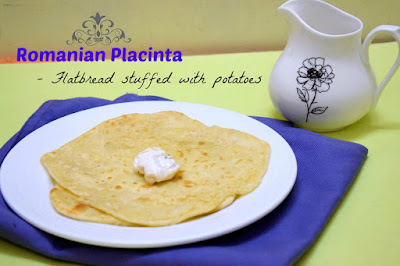 Anyway, Placinta is  flatbread made with buttermilk and cooking soda. The filling can be soft cheese, apples or potatoes. In some traditional sites, I even saw cabbage being used as the stuffing. Well, I stuck to potatoes and this did turn out to be the tastiest though the recipe is so simple and practically nothing in terms of spice for the stuffing. It truly keeps up to the fact that this is served with tea for Breakfast.

The only change I did was to add a bit of salted butter to the mashed potatoes and then cooked it in salted butter. 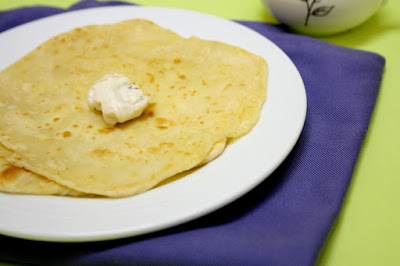 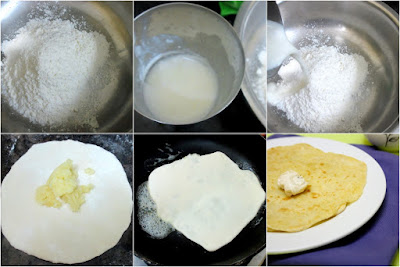 MW the potato for 6 mins. Soak in water and peel. Mash when it is still hot with salted butter. Keep it aside.

Take flour, salt and baking soda in a large bowl. Whisk well to combine. Mix buttermilk and water together.

Now slowly add the liquid to the flour mix and start kneading. The dough will be pretty messy to start with.

Knead on the dough till it becomes pliable and easy to handle. Let the dough rest for 30 minutes.

Flour the work surface generously, divide the dough into 5 portions. Take a portion of dough and roll it out into a circle of 5 - 6 inches.

Keep 2 tbsp of stuffing in the center of the rolled dough. Bring the edges together and close and roll it again to form a circle. Be gentle while rolling, ensuring the stuffing doesn't come out.

Heat a nonstick pan, grease with butter, place the stuffed placinta on the hot pan, and cook for a minute or until the sides are brown. Flip and cook the other side until brown.

Serve hot with cream cheese or as I did with garlic mayo. 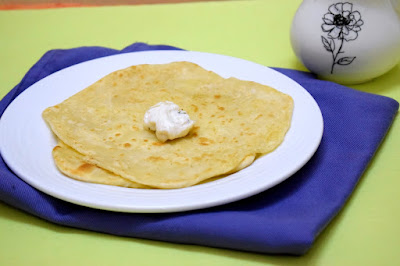