Next on the list of Breakfast dishes I have one coming from Sweden! Pancakes are so easy to make and you can quickly get it done when you are in a hurry to make something for the kids. Even then this is a hurried post and I had simply no energy to think on plating this differently. I had bookmarked the recipe when Pavani had posted it. For one of the previous Mega BM, I had planned on taking up Pancakes as the theme. I had ended up bookmarking loads of them from Pavani. She really has some amazing pictures clicked.


Since I thought I had to restrict with one country I could try only one recipe. I too have some handful of pancake dishes. Konda loves pancake, so it is easy to make these and feed her. I personally feel these are Maida Dosas. Still when following a recipe, got to give that cuisine's name. While I was making these pancakes for Konda, Chinnu was making Dosas for us.

Remember I mentioned that Chinnu helps me with cooking roti! He has learnt to make dosas over this weekend and ever since then he insists he only makes for all. And he makes a mean thin crispy dosa! He doesn't like thin crispy dosa, however since he is not able to make thick dosas, he had to eat what he made. Seeing that Konda asked him how he was now eating thin ones, whereas whenever she used to make for him, he used to complain. He smartly replied that 'Mummy made me eat and I liked it' That made Konda ask, 'Oh when I used to make you didn't like, now you like because Mummy made for you'. Poor guy, he always maskafy his sister and was clueless how to handle the situation. I pacified her stating the actual fact and she was grinning, saying that was the reason why she was forcing him to eat thin ones too.


Well, we all had a fun time talking about this. Hubby Dear was saying on how his sons were helping me with cooking. I told Peddu that he can learn to make Dosas next. He said he already knows, just that Chinnu is refusing to let anybody else do it. Chinnu proudly told me that Peddu can observe him making dosas and learn!

Will update soon on the progress on Dosa making, while you guys enjoy this pancake.


And before I leave let me talk about the spoons that are featured. I know one may not eat a pancake with spoons. These are special as they were gifted blogger friend. It happened some months ago when these were featured by Rafeeda. As other bloggers were saying they wanted for themselves, I too pitched in and said I want. Little did I know Rafeeda will buy for all of us and pack it home. Thanks to Lubna for being so kind enough to courier to my doorstep. I will be featuring it in a better way, for now, I just wanted to share the love. Thank you Rafeeda. 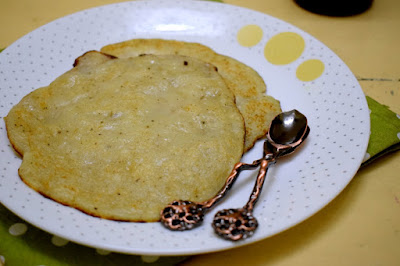 How to make the Pancake

Take all the ingredients in a bowl and combine well.

Heat 2 tbsp oil in a nonstick pan; add about 1/4th cup of batter and cook until golden, about 2 minutes.

Flip and cook for another 1 to 2 minutes until golden.

Serve hot with sauce or jam. 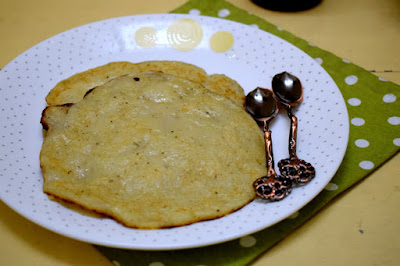