With just two more to go for Cooking Carnival, I have a new Flatbread from the regions of Tatarstan and Bashkortostan. Both these regions are federal subjects of the Russian Federation. I seem to have forgotten my geography that I don't even remember ever reading about these regions.

I landed in this Flatbread when I was forced to pick up another instead of what I had planned to make. I had selected Kartoffelpuffer/German Potato Pancakes and only at the last moment read the recipe and found that it's just the same as Rosti or Latkes. I had no interest in repeating the same and hurriedly selected another. I have a list of Flatbreads collected over a period, wanting to make it myself. 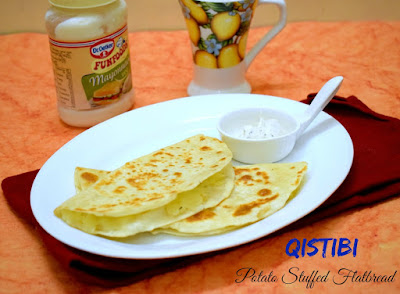 Out of those Flatbreads, I saw that this Qistibi is stuffed with Potatoes and it suited just fine for today.

Wiki says that Qistibi is a popular traditional dish in Tatarstan and Bashkortostan. Qistibi is roasted non-fermented flatbreads with various fillings inside. The most popular filling is mashed potato but it may also be ragout or millet. This flatbread is made very differently as the filling is placed on the one half of the flatbread and is covered by the other half. It is then cooked with butter on a hot pan.

Qistibi is either served for Breakfast or can easily be served as Main course. Recipe qistibi Tartar sounded quite a tongue twister 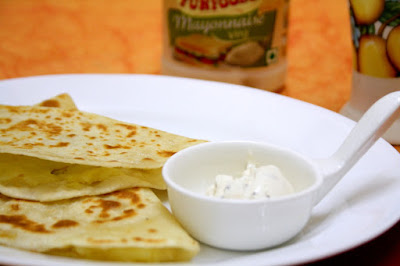 This shot was clicked by Konda. She was keen in clicking in her own style, while the rest I took as per mine. 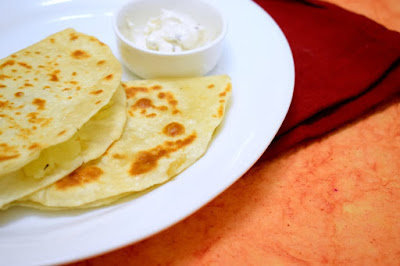 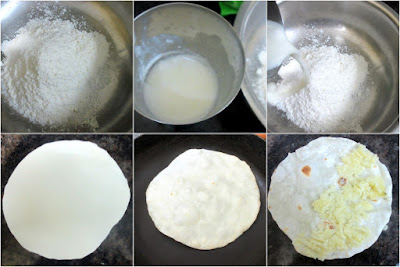 How to make the Qistibi

Take the ingredients in a bowl and knead to soft dough. Let it rest for 30 mins. Divide into small balls to make thin tortillas.

MW the potatoes for 6 mins, soak and peel the skin. Mash right away with butter, salt and grated onions. Keep it aside.

Dust and roll out thin tortillas of 6" diameter. The dough actually rolls out very thin without breaking.

Heat a nonstick pan and when hot, cook the tortillas on both sides, ensuring they don't get burnt.

Remove to a plate. Take a spoonful of the filling, spread on half the circle. Bring the other half to cover and press down.

Heat the pan again with butter, place the flatbread and cook until crispy on both sides.

Serve with sauce or tea 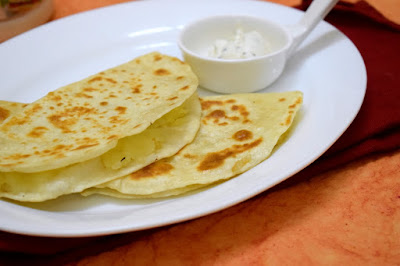