For the Indian Cooking Challenge this month, we travel little down from last month, to the famous Chettinad of Tamil Nadu. Chettinad Cuisine is very famous all over the world. While I don't know if all the recipes that are famous as with either Chettinad suffixed or prefixed, I have enjoyed some of their special dishes and I know I would love to make and feed my family from this cuisine anytime.

So when I was almost very late to decide what to plan for this month, I happened to chat with PJ, with the intent of asking her to suggest something. After much deliberation on various dishes that she had in mind, she sent me this Biryani link for us to check out. Since this blog was specialized in Chettinad recipes, I was sure this will be authentic. The recipe is adapted from this blog, with my own interpretation with few ingredients. 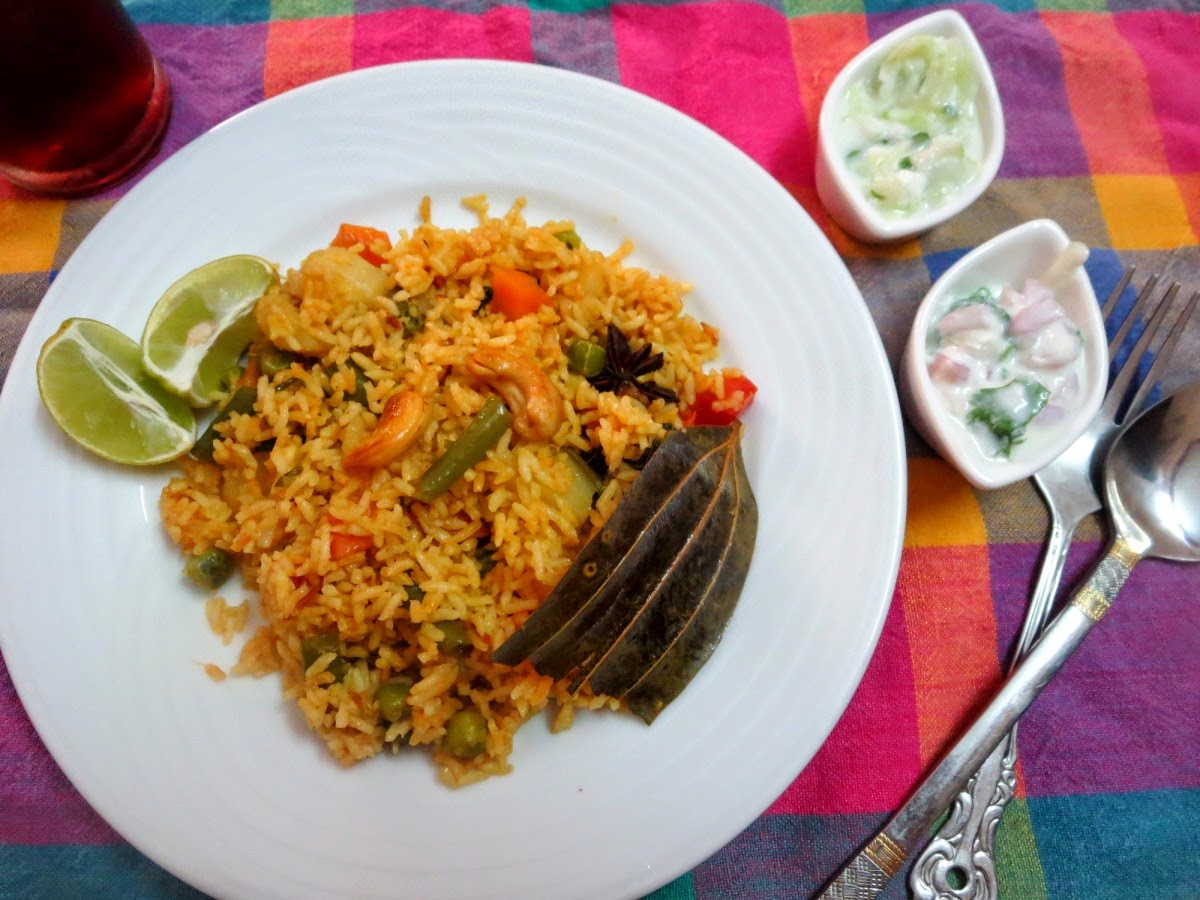 The main ingredient that is supposed to bring out the speciality is the usage of Marathi Moggu or Marati Mogga. This Indian Spice is used extensively in Karnataka's special Bisi Bele Bath. Ever since I knew Amma making this Bisi Bele Bath, I have always known her using this particular spice and that's what I always knew, gives its characteristic aroma and taste.

However of late I haven't been able to get my hand on this spice and whenever I ask the shopkeeper, I am given these long ones, which goes by the same name as Marathi Moggu. However from my own experience and taste, I know it's not the same. Even at looking it, I can say that this particular long spice will be very pungent and we will not be able to grind it, as you are supposed to do with the Bisi Bele Bath's special spice blend. 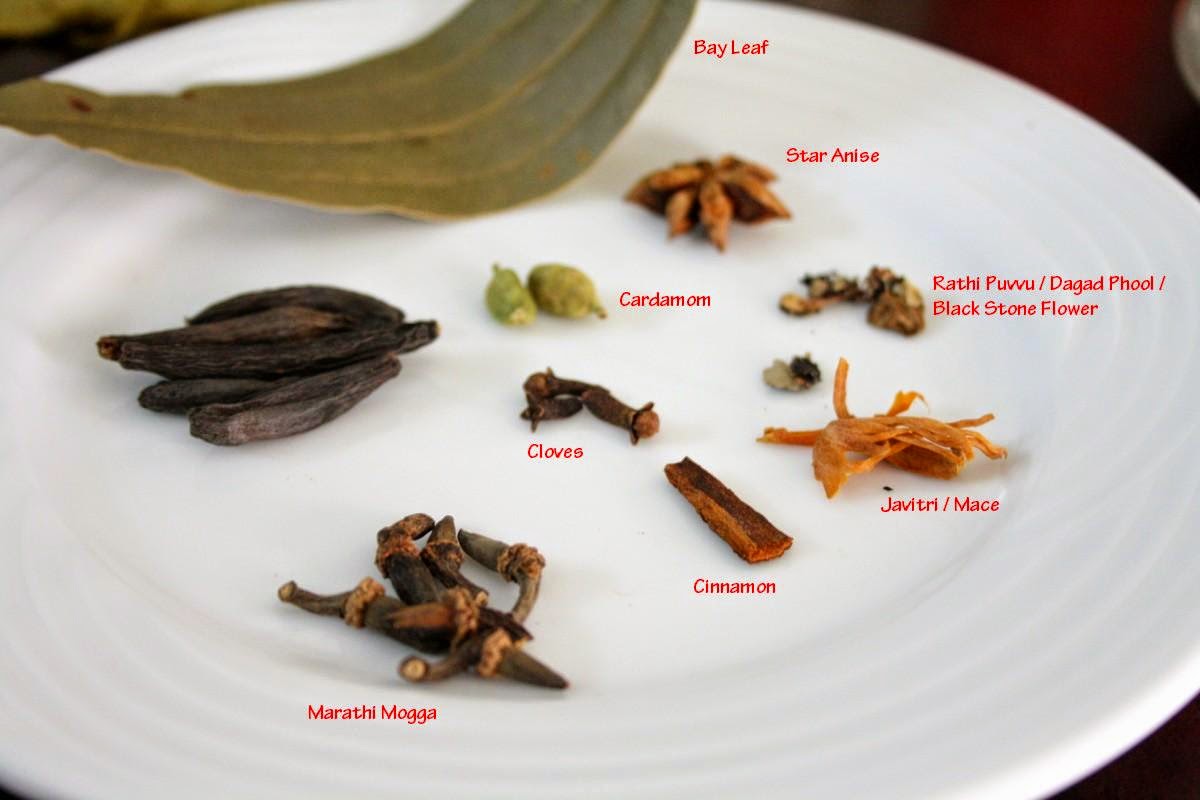 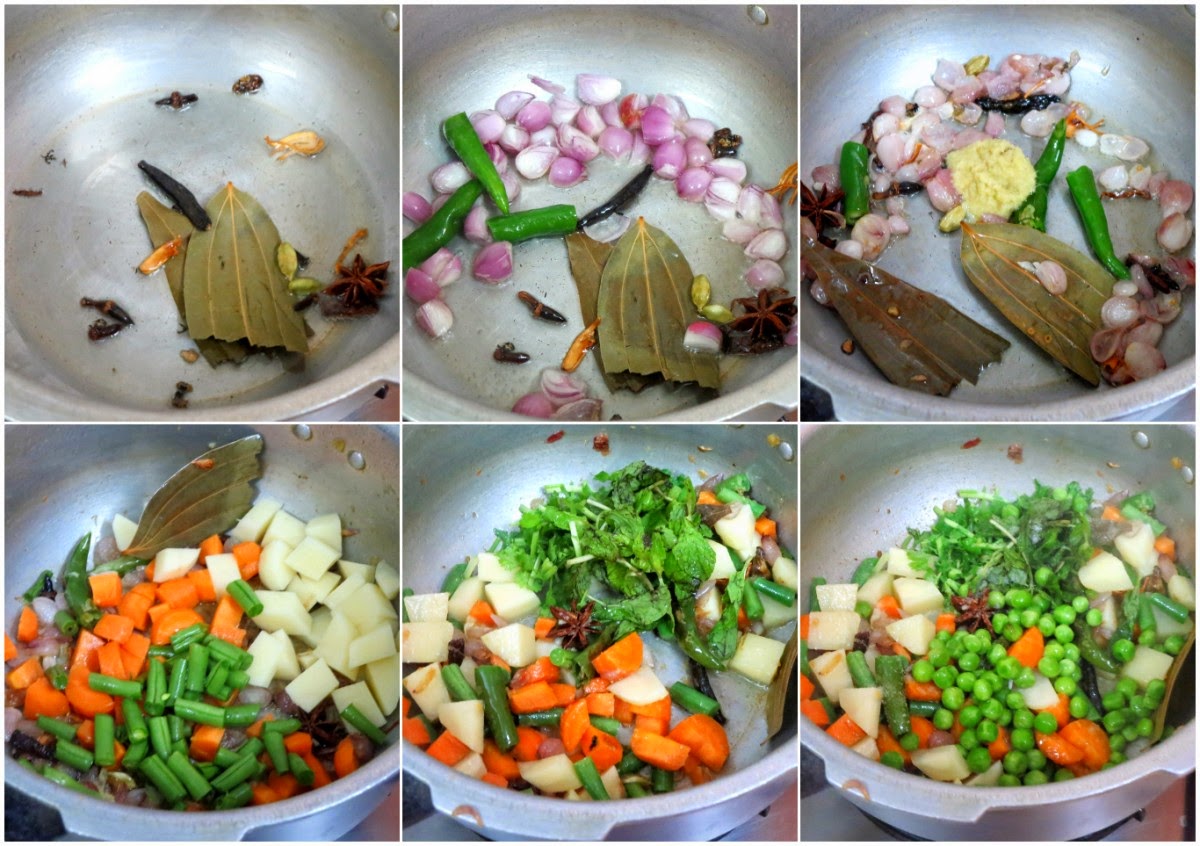 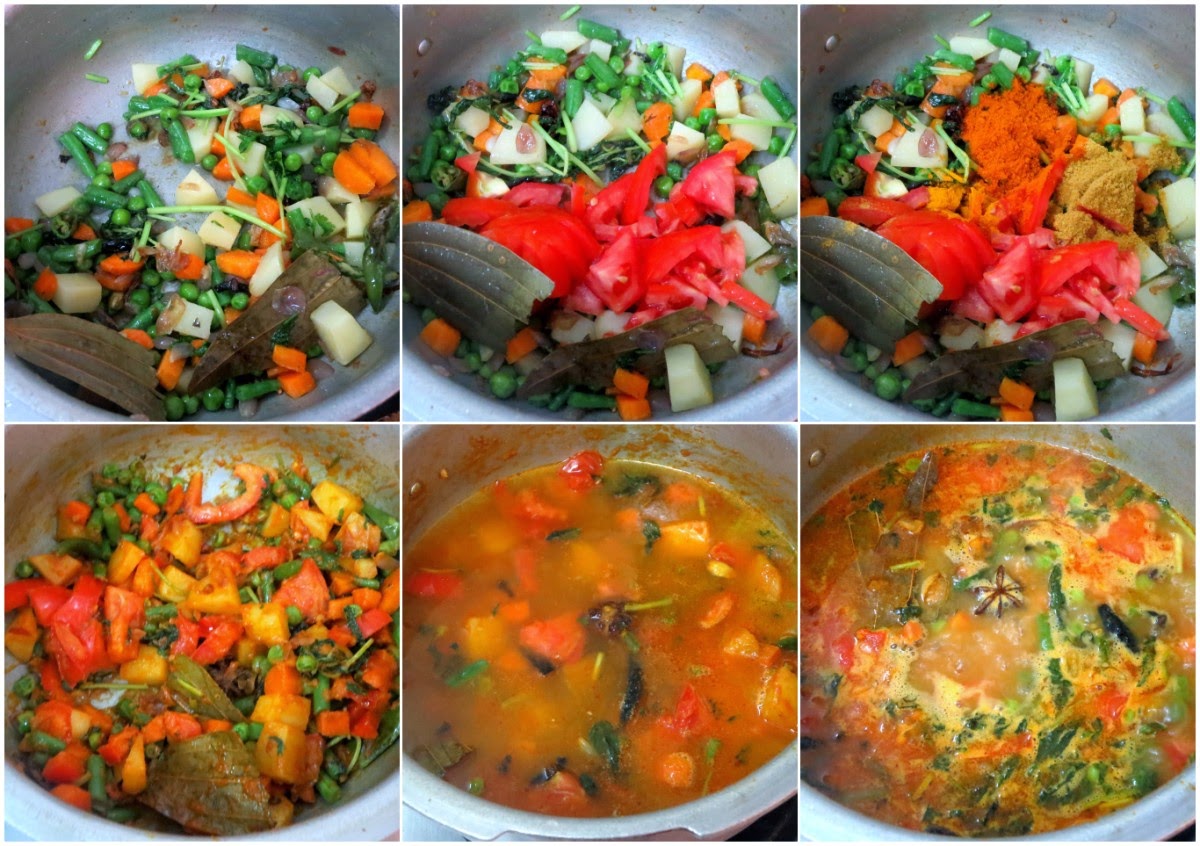 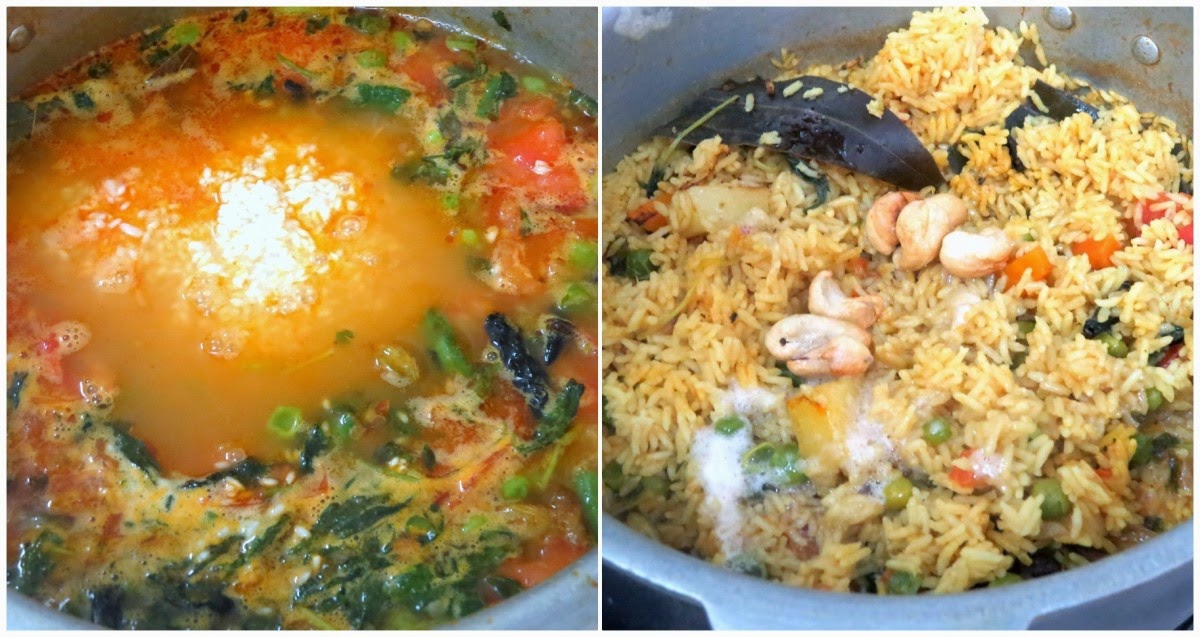 How to make the Kaikari Biryani

Wash and soak the rice for 30 mins.

Wash and dice the vegetables like potato, carrot into medium cubes, cauliflower into medium florets, slice green beans into 1" lengthwise and some green peas.

Peel and chop the shallots. Chop the tomatoes. Fry the cashewnuts in ghee until golden brown. Clean and chop both pudina and coriander leaves. Break the green chillies into half.

Heat oil in a pressure cooker, add the whole spices tempering to the hot oil and saute for 1 minute.

At this stage add chopped tomatoes, red chilli powder, turmeric powder, coriander powder to the vegetables and mix well until tomatoes are tender. Add water to the pan, slightly cover with lid and bring vegetable mixture to boil.

When the water reaches rolling boil stage, add drained rice along with required salt to the pan. Stir well to combine everything and cover with lid, Pressure cook for 3 whistles,

Once the pressure falls, remove the lid, garnish with fired cashews, coriander leaves. 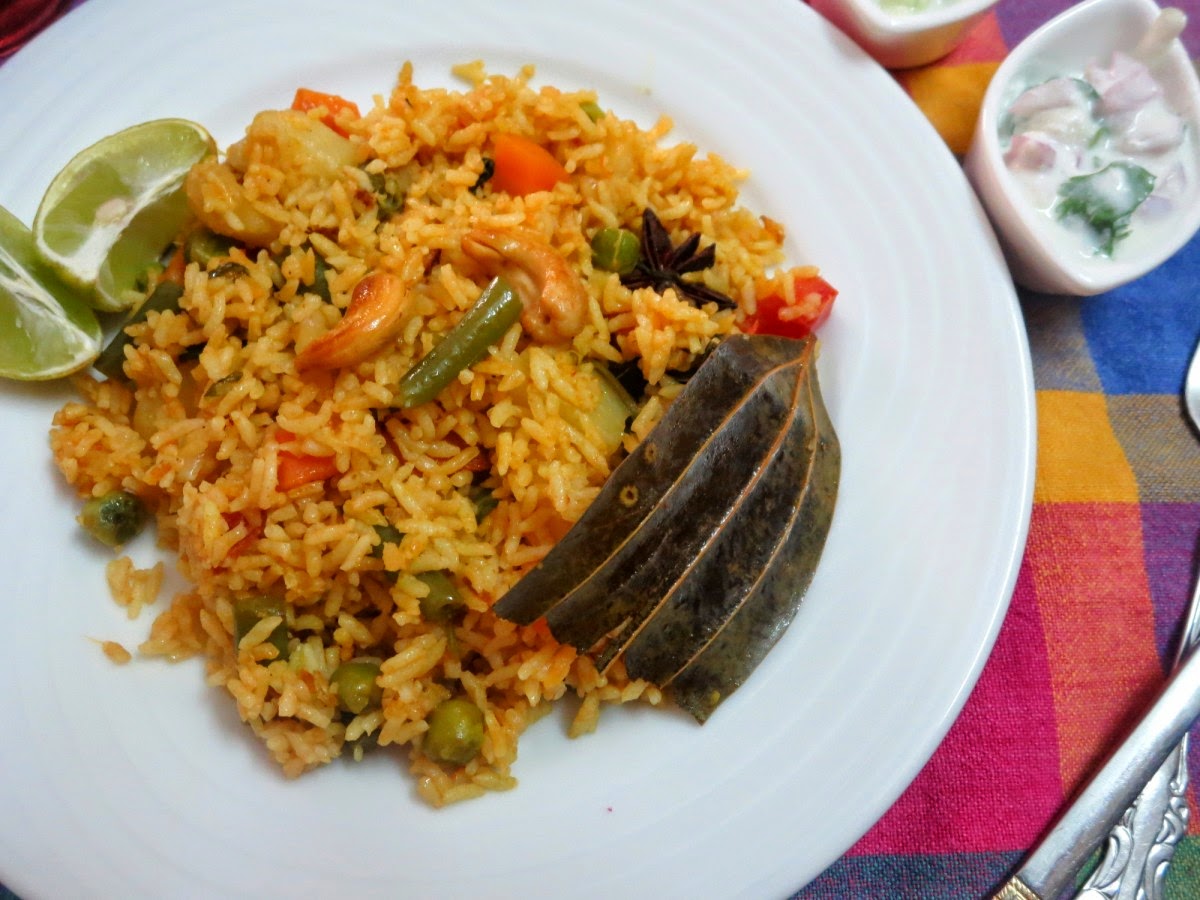 Jeera Samba is the special rice used in such biryanis, to get the aromatic and typical taste. If this is not available , you can use short grain basmati rice.

Marathi Moggu can be replaced by adding couple of more cloves, however the taste may not be the same.

The original recipe listed Annachi poo and Star Anise separately, while it's one and the same. So I add Black stone flower and Mace. The final biryani was very aromatic and tasty.

The method to mimic dum style can be achieve if you cook with just the lid covered without putting the pressure cooker on whistle, and by cooking in low flame for 10 mins, by which time about 1/2 of the water is absorbed and you get separated rice grains completely cooked in the vegetable broth. 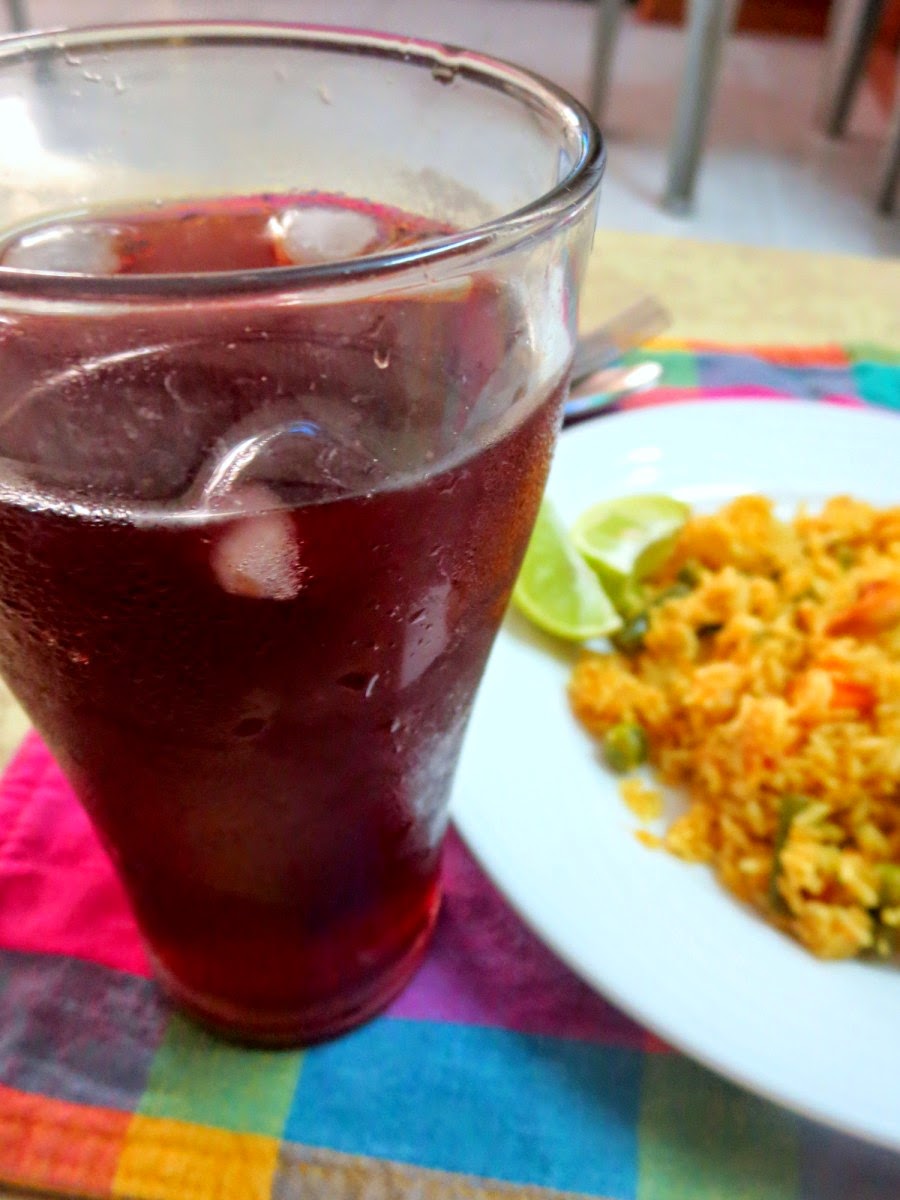 On the Sunday I made this Biryani, Hubby Dear had got Nanari Syrup and made us a drink for us to enjoy with the biryani. Nanari is a herbal drink, famous in Andhra, I believe it's in other states as well, as expected. However I got to taste it again after a long time and it sort of rekindled my childhood memories on some delicious drinks. I am not still sure if this was it, however I enjoyed it then, which was during a trip to hubby's native place, and now when he made it again specially for me.

Here's a toast of Nanari with the special Indian Cooking Challenge!